Adopt A Puppy Or Dog Today. Save A Life

My shock on receiving the judging programs for the Brooksville shows in January. Oh, my!  380+ dogs the first day! The totals that week were 4,000-plus every day. The show chairwoman told me she had to hire 23 additional judges. The club members worked soooo hard. The entries came from every corner of the U.S. because Florida was the only state with shows. The depth of quality of the exhibits was outstanding! Three of my Group winners are now number one in their breed. The fourth had puppies! It was a privilege to judge so many correct examples over that weekend.

Easily, sitting at ringside during our national specialty in October, catalog in hand, and watching more than 100 Whippet champions being judged, most of which I had never seen before for obvious reasons.

When Cathy Gaidos and I decided to start putting on an AWC National Specialty in 1987, the idea was roundly criticized, but I think time has proved that we were right. The AWC National Specialty is so much better than it was, and not being held at all in 2020 and at a different time of the year in 2021 made me realize just how important it is, especially in a country as vast as the U.S., where you really can’t see all the best dogs in one place anywhere else.

My most exciting dog-show memory of this year is judging the fabulous Terrier Group at Morris & Essex. My only regret is that my dear husband Dwight was not there to see it. I trust he was watching down from Heaven.

In July 2020, I began working with AKC, Junior Graser, Ed Fojtik, Barry Rose and Terry Bilton to revive two beloved clubs. The Wisconsin Kennel Club was founded in 1886 and the Dubuque Kennel Club in 1955, and both disbanded about a decade ago. I remember Milwaukee and Dubuque fondly as being two of the first shows I ever attended with my mother Ann Serak and our German Shorthaired Pointers, in the ’60s. We named our new dog-show weekend the Renaissance Cluster, and chose the beautiful Alliant Energy Center in Madison, Wisconsin, as our home.

Finally, after months of organizing and planning, our first shows were held in November 2021. It was such an uplifting experience to achieve our goal of hosting first-rate shows to benefit dogs, specialty clubs, our sport and the local community. We received accolades and thanks from participating specialty clubs, our committee members, judges, exhibitors, stewards, vendors, building owners and surrounding hotels. I felt our journey really made a difference, and it was all very gratifying! This memory will stay with me forever.

The re-emergence into some kind of life. Haircuts, grocery shopping, visiting and eating outside. Paying the many bills from online shopping.

The one memory that will stay with me forever is Frank Sabella, my dear friend. Frank was so important in my life, and I am so grateful that I was able to be with him many times during the last days in his life. His memory, his kindness and his friendship will last the rest of my life.

2021 was a different year for sure with dog shows restarting, but was also a great year with the launch of the Rocky Mountain Bloodhound Club, and a great gathering of hounds and humans at the Plum Creek Kennel Club Dog Show. Here’s a launch photo. 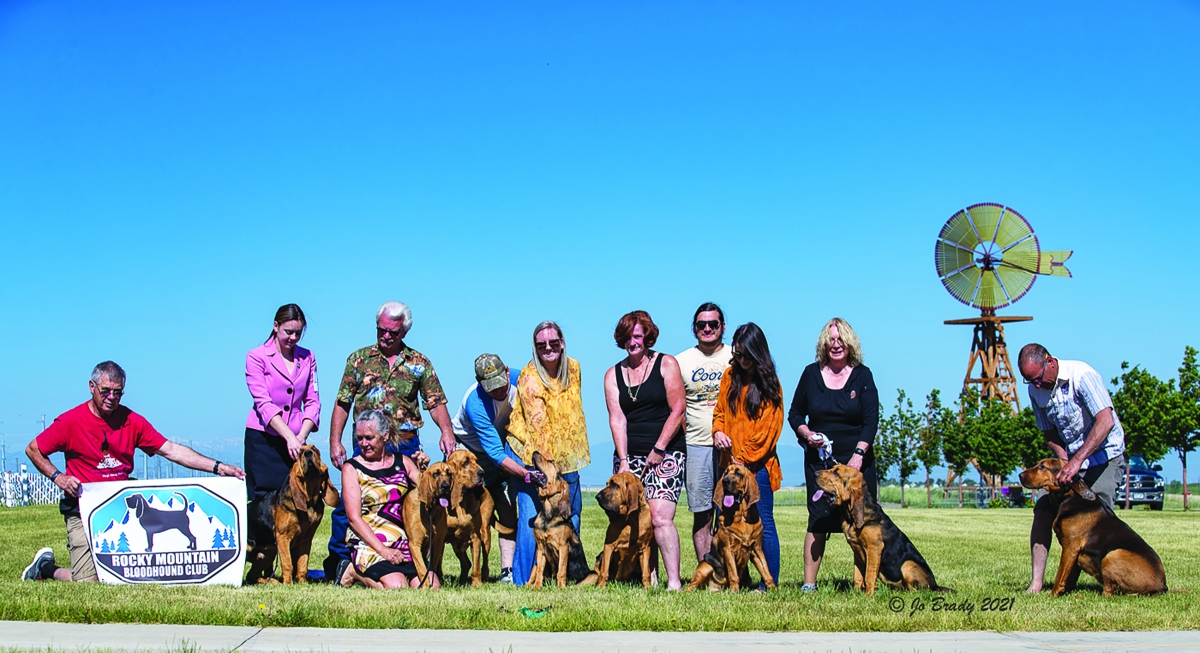 October 17, that very special moment when I had the privilege to walk my daughter Julie down the aisle for her marriage to Candler Hobbs. A moment I shall always cherish.

Judging at the Kennel Club of Philadelphia National Dog Show. This was a marvelously put together show with every detail handled flawlessly. In contrast to so many clubs, including one of my own, where there are barely enough able-bodied members to host a show, this kennel club has a wealth of enthusiastic, capable members to share the load. So refreshing. It was a fun show. And the reaction of my family and friends was priceless. I heard from non-dog people I hadn’t heard from in years. Even my doctor called me.

It was a tough year for all of us, especially those who had to cancel or postpone weddings. My granddaughter had to postpone hers; same date, following year, Oct 10, 2021. To my dismay the 10th was also Montgomery County Dog Show, one I’ve never missed. To add to my “problem,” in between the wedding and a litter of pups I was twice in the hospital with an unrelenting kidney stone.

My Norfolk were in the capable hands of my handler, Amy Rutherford. The first call I received at home was that my class male went Winners Dog; the next call I received was my bitch went Best of Winners. Needless to say, I was thrilled. After all, this is Montgomery! According to the info I was given Amy ran to the Smooth Fox Terrier ring. Cutting to the chase my little Norfolk, now in the hands of Dasha, Amy’s assistant, took the breed over specials. This is the first time an American-bred Norfolk has collected the big blue Specialty ribbon from the classes at Montgomery. My little Jewel now stands with the imported Coco, who years ago achieved the big win from the classes. And in the Smooth ring with Amy at the end of the lead a young bitch, Aimhi Head Dover Heels, achieved the big win also going BOB from the classes making her breeder/owner Amy, myself and Peter Holson as co-owners thrilled. And, yes, I made it to my granddaughter’s gorgeous wedding.  Life is good.

My favorite experience of 2021 was the television broadcast of the AKC National Championship. I was given the honor of judging the Herding Group. But the interesting aspect of this story is that my wife of 52 years said to me prior to show … “You have a great year to be judging on TV.” The obvious retort is to ask why this year is so special. The reply: “You look better when you wear a mask!” Ah, the support of a loving wife.

The loss of my mentor, dear and loved friend, Judi Daniels. I will never, ever forget the last words she spoke to me in September 2021, and will cherish them forever.

The memory that will stay with me forever is arriving at Lyndhurst Mansion for my Westminster 2021 judging assignment and seeing my name and entry on the iconic purple-and-gold Westminster judges’ ring sign. That image is in my mind forever. The entire WKC experience was without equal! In a very trying year for all, this was certainly the highlight!

Bono the Havanese rocking onto 100 Best in Show awards after a year out due to the pandemic.

As the judge pointed to us for BOS on our last day of the Raleigh, NC shows in March of this year, Tanssi (aka GCH Wildest Dream Kindred Spirit CGCA, TKN, TT, NWPD) became a Grand Champion. Tanssi is my first show dog and we made it this far together, owner-handled by me all the way. It was such a proud moment for us both. What a fun ride it has been so far learning and growing together as a team.

As often as we hear negative comments about dog people (judges, exhibitors, et al) and the dog world in general, we all need each other. United we stand, divided, we lose.

I will remember all the great friends who have cheered me on during 2021 when my dogs did so well at the dog shows, and most importantly at the numerous field trials we attended across the East.

Numerous titles were obtained and celebrations afterward were enjoyed by all.

Friends in the dog world make the world right. All the time.

My most exciting dog show memory of this year was judging the fabulous Terrier Group at Morris & Essex.  My only regret is that my dear husband Dwight was not there to see it. I trust he was watching down from Heaven.

Take the Lead Celebration of the Season, 2010